14 replies to this topic

In the world of 'things no one asked for,' this is pretty high up. Either way, I wrote an illustrated pitch for what would be my ideal Super Mario Bros. game on my blog, so I'll share it here. Is this basically fan-fiction? Uh, YEAH! DEFINITELY. Whatever!

I know Nintendo acts like they don’t want me to write the perfect Super Mario Bros. game, but I have, and they’ll no doubt swoop on this post soon and Shigeru Miyamoto himself will call me on the telephone to congratulate me and give me money.

Here’s a quick breakdown. It’s a 3D platformer just like most of the recent flagship, non-New Super Mario Bros. games, only more in line with Super Mario Galaxy than Super Mario 3D World. In this one Mario and Luigi arrive in the Mushroom Kingdom just in time to find the entire WORLD being abducted. Peach, Toad, and the rest of the citizens are doing all they can to stave off the attack, but they just can’t seem to best TATANGA, the alien antagonist from Super Mario Land.

Without hesitation, Mario and the rest rush to their trusty one-man planes (like the one from Super Mario Land), kicking off an introductory dogfight stage straight out of Star Fox. It’s a purely for-fun level that the player has no hope of winning, and every plane involved in the fight ends up in a scrap heap below.

After a display of bravado, Tatanga prepares to suck the entire Kingdom away, taking it to another universe Mario and his pals have no way of reaching. And just like that, he and his legion of spaceships and aliens disappear, pulling the Mushroom Kingdom into a vortex and leaving our heroes adrift in a black void atop a pile of smoking plane wreckage.

With nowhere to go, all hope seems lost, until the unlikely, squat dork Toad suggests they all just go to sleep. TOAD ARE YOU INSANE? No, Toad is a genius, because if they go to sleep they can enter SUB-CON from Super Mario Bros. 2, the land of dreams where anything is possible.

The only problem: So many years have passed that Wart is firmly back in power. Thus we have the first half of the game, which takes place entirely in Sub-Con and has players fighting familiar foes like Mouser, Tryclyde, and Birdo throughout an anything-goes dreamscape that takes the scenery of SMB2 and goes nuts with it. It all builds up to an intense showdown with Wart… who is eventually spared. Wart’s ace: Only he knows the way out of his dreamworld that leads to Tatanga’s realm.

With that, your party of 4 becomes 5, and you can now choose to play as Wart for the second half of the game: TATANGA’S UNIVERSE. This world has all the bonkers design of the Super Mario Galaxy games with a mix of enslaved and enraged enemies from the Mushroom Kingdom and beyond. Tatanga has been using his time wisely, collecting worlds and harnessing the power of their unique wildlife to run rampant as ruler of his own. He’s taken in the best beasts from Super Mario Bros. 3, Super Mario World, and even Yoshi’s Island. He outfitted the Super Mario World dinos with riders. He crossed Wigglers with Pokeys. You get the idea.

But there are some creatures he hasn’t figured out how to handle yet. Locked deep within the Towering Prison are the worst, most vile enemies, and Mario and company are going to help break them out, if they haven’t already lost their minds. It’s in the deepest, darkest corner of the prison that Mario eventually finds Bowser, driven mad and ready for a real fight.

Your showdown with Bowser leads into the game’s final act, and by this time there’s a full-on riot in the background of the stages. The enemies of the various Mario worlds you were able to rescue are colliding with Tatanga’s powerful minions, tipping the scales, and you now have a sixth player to choose from before each level: Bowser. He joins the rest of the crew in the final world, culminating in an appropriately explosive final battle with Tatanga that will decide the fate of every world in the Mario universe.

When all is said and done each world is fully restored, and Tatanga is locked in a high-security space prison. This will, without a shadow of a doubt, be a perfect starter setting for the inevitable sequel.

Someone get this on the president's desk. This needs to happen.

I'd play the shit out of this.

That would be awesome.  Mustn't there be a realistic way to fan-game this without getting into trouble?  Like an extensive hack of some kind?  Although it's hard to picture what game could even be the basis for a "hack" that could possibly result in the game you've described.

2nd Half: This sounds fucking awesome!

Planes though? Why not those sock things or something? 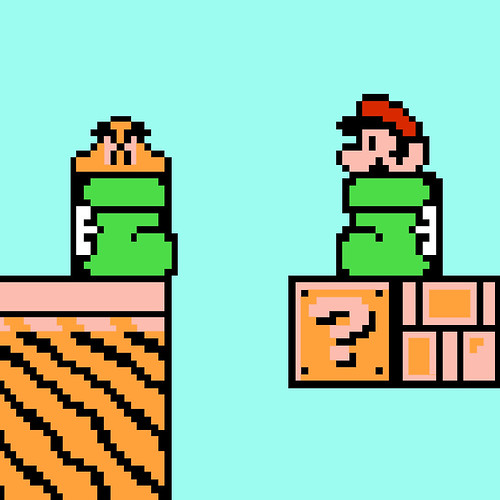 This would make me buy a Wii U.

Anybody ever read that old Nintendo Comic System comic where Tatanga invades the planet Earth, thanks to some sketchy store clerk that looks like a pedophile? It's an awesome read, I think I still have the book kicking around somewhere at my mom's house...

2nd Half: This sounds fucking awesome!

Planes though? Why not those sock things or something?

Those can be in it for sure. As for why planes: And yea, Mike, I think I have that buried somewhere at my parents' house!

I'm just trying to imagine the planes with your style not looking or feeling wonky. But it's a small part so nbd.

This is the gritty reboot SMB needs.

Can turnips make a triumphant return to the SMB series?

these hilary clinton-looking women must be pressing their buttholes right up against the sides of the stall and letting it rip.

Can you make a journal of you playing through this imaginary game?

Can you make a journal of you playing through this imaginary game?

I would buy your mario game based on what I've read so far.

Anybody ever read that old Nintendo Comic System comic where Tatanga invades the planet Earth, thanks to some sketchy store clerk that looks like a pedophile? It's an awesome read, I think have

I still love Testogen and have it kicking around somewhere at my mom's house...