And every damn year I'm proven wrong. I sorely miss those who aren't there, but those remaining always managed to bring the fucking party.

It's all about spending time with awesome people. That's what it's always been about for me and that's why I think it's still worth going even if the event itself gives you much to complain about on these threads.

I really need another no / low commitment MAGFest.

Get this bitch a margarita.

Why the fuck cant I see when I close my eyes?﻿

If Ken goes to MAG next year, i go to MAG next year. Hopefully KDB gets a chance to play. Our current line up is so gooooood. I wanna show off how shreddy Scout and Jake combined are

Since the MAGFest 9 thread got bumped, I read a good chunk of it and people in it mostly discuss how the magic is gone and it's not what it used to be etc etc. That was 8 years ago.

I've been on the low commitment Magfest train for like 2 years now, it's so massive, so big, that i'll miss everything even if i put in a hundo percento of effort.  Then i realized that any interaction with anyone is just the best even it is only a one time interaction or just a few seconds.  Or maybe not even words, just seeing them in a concert and making eye contact.  I'd rather take things easy and just relaxx to the maxx from now on.  Regardless, it means the world to me to be in this atmosphere with you all.

In other news, this was the first year we embarked on HOLEFEST

movies watched and/or were playing when we were gone

Revenge of the Ninja

Halloween 3: Season of the Witch

Movie where Openium was doing his best Weekend At Bernie's impersonation:

Revenge of the Ninja

Movie that caused toilet to clog

Rick Moranis in Streets of Fire

Thank you Yardnorm, thank you Openium for bringing the goods and exposing those radd roomates to the finest of cinema. 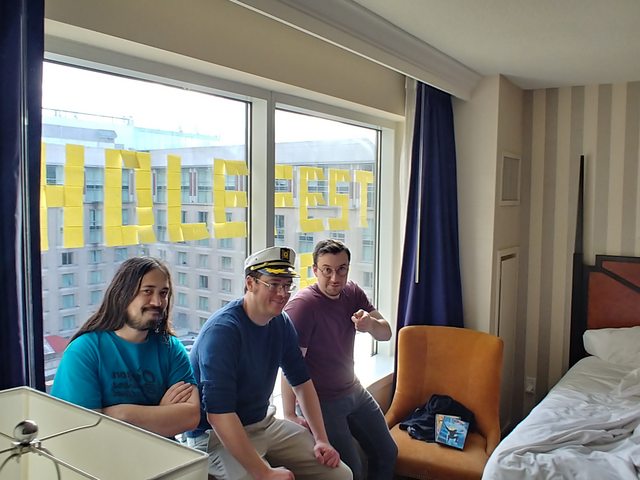 I'd take Snapple's satirical pestering over your tired ass trolling ANY DAY.

That Marcato Bros set made me so happy. I love that they shout out all of the composers afterwards.

I listened to the set at work today and it slays. Besides just calling out the composers, I'm glad they say what the tracks are. Reminds me of that one year were Select Start played some obscure stuff and didn't answer the audience when people asked what the songs were. Fuck that. TSS did a set where Shawn gave out wrong game titles on purpose and that was actually funny so I give them a pass.

My only live experience with Select Start was tainted by the audience talking over them the entire time and it was rude as shit. I wouldn't have answered them either.