The Minibosses are 20 years old today

50 replies to this topic

here's to aaron and company for providing me with some of the best times and friends over the past 16 years i've seen them, and always putting on a grand show, no matter what the lineup or venue.

i've literally chased them all over country at this point (and outside of it), hauled piles of people to see them, and likewise been hauled around strange towns to listen to a bunch of dudes crank up some game tunes.

i've seen them play in derelict bowling alley back rooms, every variant of gamer con under the sun, and major venues opening for big label bands in front of confused casuals.

their posters are on my walls.

their records are on my shelf.

met pretty much all my good friends via the minibosses and their forum, and lost a few the last couple years.

i work with a forum member.

we flew them across the country to magfest to perform since magfest wouldn't do it.

i had the worst diarrhea of my life before one of their shows.

i've had a lot of fun, i'm glad they're still kicking, and i'm ready to see them again soon.

I want to hear that practice tape.

I remember reading about the Minibosses in the July 2000 issue of Electronic Gaming Monthly. The one that had Final Fantasy IX on the cover. I was just getting into video game music at the time having discovered OCRemix just before that and loving video game music in general. I hadn't heard of anyone getting a live band together in order to play video game music. At first I was bummed when I read that they were from Massachusetts  but quickly got excited when I read they were moving to Phoenix!

I don't remember what their first show was in Phoenix but I do remember one of their early shows being at Hollywood Alley. My dad drove me about 30 minutes just so I could go see them. At the time it was just the original trio. Really fucking cool to see at the time. I think I joined up on the forums not too long after that. Their first being just anyone could post without even signing up and it was not even structured. I think it was just a continuous stream with separation for different threads. No real forum structure.

Eventually I would make it out to just about every local show they performed, mostly at Modified Arts but sometimes at the Paper Heart (met Sean IRL for the first time during that time), or at some storage unit out in Buckeye or somewhere in south Phoenix. That was great because I got to see Neptune who were amazing live and got to hear some death metal band rehearse a couple storage units down.

I'm glad I found the Minibosses when I did and I'm glad to have made so many good friends through the years from them. They also helped inspire me to play video game music on my own and want to do my own band which I finally did this year with the Rocket Knights.

That EGM issue was also my introduction to them

I rode in a car full of strangers driving across the county so I could see the Minibosses at Magfest 4. Never looked back

I literally wouldn't be where I am today if it weren't for the Minibosses. So much of my adult life is because of them and this forum.

Greatest band in the world

Greatest band in the world

Second only to Limp Bizkit.

Ah yes. I recall first seeing them on The Screensavers when TechTV was still around. A++ band, would listen again, would join message board for 14 years again

BANDCAMP featuring free music such as:

Oh, and random stuff on SoundCloud

holy shit do i feel old now. im sure the bosses are feeling it along with any of us in our early 40s and late 30s but when we all look back, im sure we are generally sayin the same thing, 'its been a hell of a journey'. my first exposure to the bosses was in '00 or '01 right when i started getting my feet wet with making vgm remixes.. i had been doing tss for a few years and wrote countless originals, going through the demoscene era and writing the weird flavor of 8bit and idm stuff that you all know of my output. met people like virt, bogdan, machinedrum, ilkae et al along the way in those late 90s years. i wanted to branch out into other stuff in a similar vein where i could bring some of the elements of acoustic instruments that i did in the mathrock bands that i was in, as i figured i'd be a good talent to do certain songs from video games in a way that maybe nobody else did. so i went on soulseek and napster looking for other artists that might be doing it. i'd put in 'zelda rock' or 'metroid cover' or whatever. when i discovered the minibosses, it was in mp3s that didnt even have a band name, so i kinda had to hunt around the internet to find these guys, of course at that point there was very few actual bands doing it. the bosses led me to this community which was very inspirational in being able to take direction in what songs i should work towards. that og forum, man..there was only a handful of us around at that point..i swear it couldnt have been more than 20 or 30 posters at that point, but the way we built that community up and brought our friends and new fans in over the years..again, its been a hell of a journey.

none of this would have been possible without the bosses and their vision and the tunes they brought us. unmistakably their own and seminal as all hell, this scene would not be without not only their influence, but them as people and their personalities and how they interacted with the fans. the first time i met up with them and played with them was on their turf in phoenix at modified arts (rip), with lovelife, another baltimore band featuring a scott malat, of the essential emo band universal order of armageddon and the great unraveling also featuring tonie joy. ill never forget hitting up taco bell and aaron and leslie when i got into town and the hospitality that they showed me, cruising around with aaron and scott in his van after the gig and the killer show i was able to take part in, maybe most of all feeling like i was part of a new movement of music that was uncharted territory...taking video game music and bangers like goonies and brash guttoral chipmusic to a stage and not knowing what was going to come of it. so many friendships that were made over the years and so much amazing music made, both on album and live performances that wouldnt have been possible without the bosses working in their own way to help create an accepting scene of sweaty weirdos who just wanna rock out to cv or metroid and go fist banging mania remembering all the time we spent as little dweebs sitting in front of the gray box and tube with a rectangular bit of plastic in our hands and chips going through our heads as we went on these 128kb/128kb journeys.

aaron, ben, woody, fred, everybody who stepped up to the plate with a stick or a pick in your hands along the way..you guys have my eternal gratitude. i wouldnt be here today chippin away and slashing down vgm still if it wasnt for you guys helpin us carve out that niche one note at a time. happy 20th anniversary to one of the most essential bands of all time.

pictured below: me, aaron, ailsean at m4. i still got that ratty grey jacket. ive given up on glasses tho, heh. 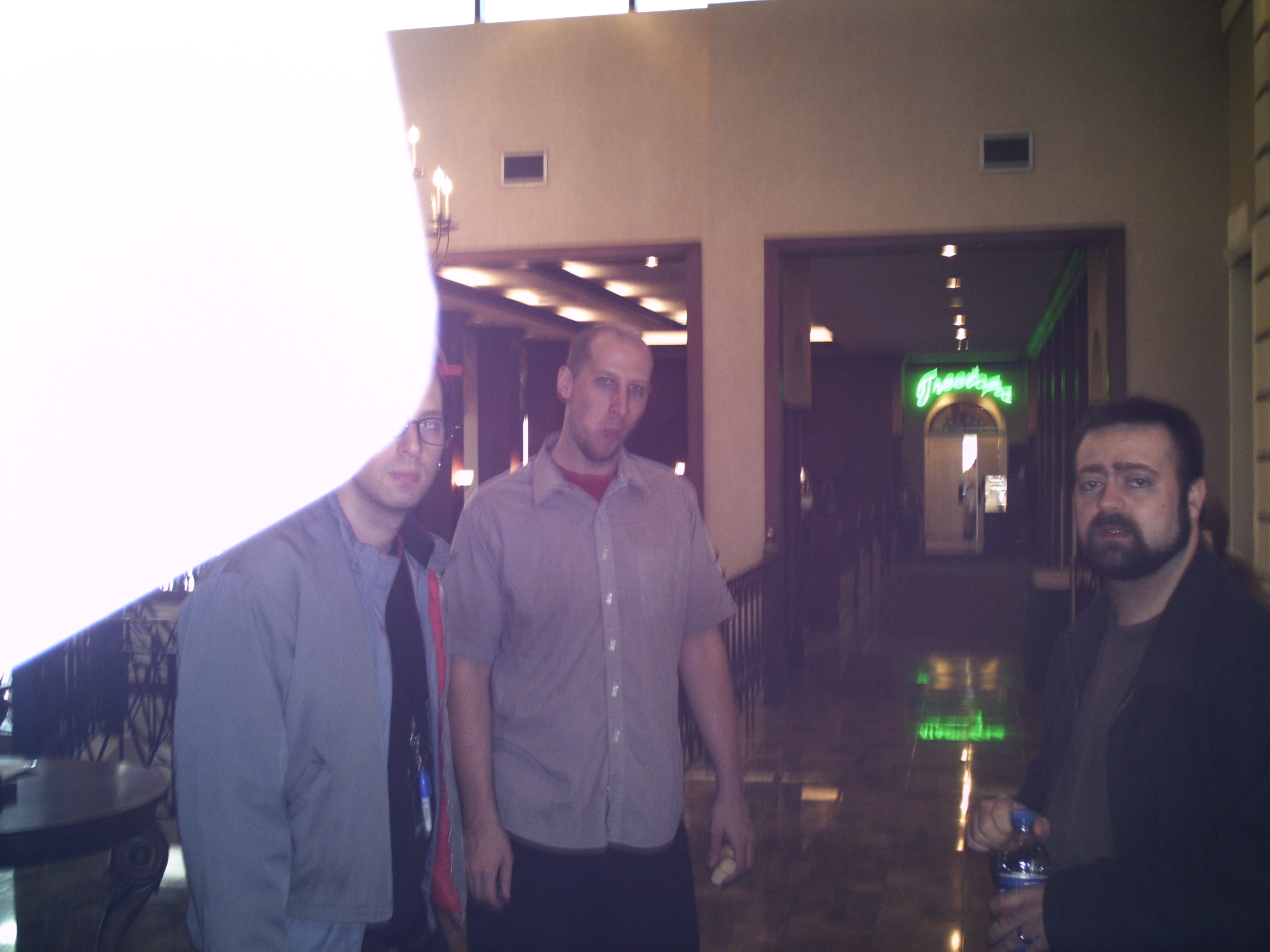 Like everyone else here, they've changed my life in indirect, huge ways.  The Shizz and the VGM scene has ended up being one of the largest factors in where I am in the world, who I am, and what I do.

It’s been so long now. Pretty sure I also jumped on board because of that EGM article. Can’t remember if I caught them originally at Ground Control or the first PAX. Been about 10 years since I’ve had a chance to see them again

Glad to be a part of this community, it’s been fun

Do you think they know we're still hanging out on their message board?

I feel very privileged that I was the only person that my high school friend Grant knew that a) had access to a car and b ) was moderately receptive to this kind of nonsense. He always wanted me to take him to Minibosses shows, and I hadn't played many video games, but I liked going to shows and was pretty much down for anything. It quickly moved beyond me humoring him. I found this place and the rest was history.

They're probably the band I've seen the most times in my life. I have never dated a guy who didn't have a Shizz account. My old man calls me "Weener." Even though I'm a naive idiot who can't always keep up with all the nerd patter (and who has never had a Sparks), I've found a home here. I love you people with all my heart.

My life definitely wouldn't be as fun or exciting without you, and that started with them.

What a wonderful time it's been.  Shizzies are the only group of people I felt were like me.  You know how hard it is to find someone who can have a drink, hold a conversation, and likes video game music?  Damn near fucking impossible.  The Minibosses made an oasis for all of us.

Pimps don't commit suicide
Back to Minibosses Message Board

Also tagged with one or more of these keywords: minibosses, music, video games, music and video games