When we were moving, I found an abandoned hello kitty squire strat. Gonna get it fixed up and make it my Eb standard guitar.

Tone is in the balls

Lol saw this 5 minutes after I saw this post 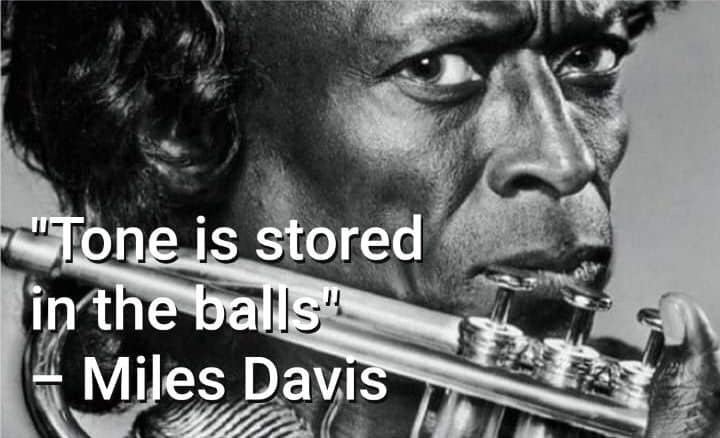 
I use the standard black JazzIII's, which I'd call medium-heavy picks? I find that on 9's I get smoother overtones with more articulate bending and a little more sustain. I played 10's since I was in high school and they never felt or sounded good, but they were "light" so I figured it was already a lighter gauge than whatever was normal. It wasn't till foxxdragons Chrono trigger album that I switched to 9's and it finally felt right.

i tried 10s, but it felt stiff and weird.

i even use 9s on acoustic, it's a bitch to find, but it feels much better to me.

I used JazzIII for a long time, then switched to V-pic "small" (basically the same size as jazzIII, but slighty thicker, made of acrylic) because they have tons more volume and treble clarity.  Then I switched to "BIG-WEST CREATION OSAKA" picks which are shaped exactly like jazzIIIs but made out of various metals (I got "sus" steel, and copper).  They are not particularly bright or harsh (they are definitely not as bright as V-Pick, nor are they as loud), nor do they eat up the strings like coins do.  The tone is surprisingly very well balanced.  (Later, due to people hyping the "JazzIII Carbon Fiber," I gave that a try, and was superiorly disappointed- it's the most anemic/thin sounding pick I've tried in a very long time...  I think I like the normal old dull-sounding JazzIIIs better.)

Then I tried a dime.  A USA 10 cents dime.... and it's magical.  What I love the most is the midrange... it's much thicker in the mids than any pick I've tried, and the unusual ridged edge gives a little pleasant/unique/fascinating sparkle.  Of couse I tried it because of Brian May, and you may call me or my tone a Brian May rip-off, but I don't care; it sounds better than anything I've ever tried.

I don't know the make but I stumbled upon a pick with a Roswell alien face and it kills and has been my number one for about a year. My bag of Jazz IIIs don't stand a chance but are there should I ever misplace the little man.

a couple of years ago i tried almost every pick under sun.

from the little nano teardrops to the doritos giant ones, and every material possible, bone, glass, acrylitic, nylon, plastic, wood, whatever.

the ones that ended up: jazz3. regular blacks or the kirk hammett purples (because i fucking love purple).

I used to swear by Jazz IIIs or the green standard Tortex picks. A few months ago I bought a pedal and they threw in a random branded pick and some other stuff. The pick might be my new favorite?

What's special about the pick?

Those are two of the things I love about it (the third being that it doesn't flex). It rewards the right technique - you gotta grip it so far up that the pick is just making tangent contact with the strings. I actually practiced a bit with this thing called a stylus pick when I was younger, and once I stopped sucking with that Jazz IIIs felt perfect.

What's special about the pick?

Absolutely nothing. It feels like what you would expect from an extremely cheap mass produced freebie pick, but it feels right.

The only thing jazzIII sucks at is pick scraping! Otherwise I can't play fast with bigger picks, and doing more complicated string skipping stuff trips me up hardcore, I just need the least amount of picking surface possible for the way I play, it's made my alternate picking so fucking precise!