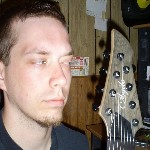 I'm Justin. I used to play in a metal band (Iscariot) that was signed, put out an album, and did a shit load of touring. Now that's over with and I'd like to get a recording studio going in the near future, and what better practice than to make metal remixes/covers of Nobuo Uematsu's music? So that's what I do.

KnightOfTheRound hasn't added any friends yet.