You have to mean what you say in order for it to be controversial!

My pants would be completely full of faeces even trying that. Nice.

This rings super true for me. Couple years back I decided to play Rollergames seriously for the first time, and once I got good at beating it I was compelled to play it over and over, same level of satisfaction as Dark Souls and the mechanics lend themselves to a similar experience too. Both games require a fair bit of pattern memorization and they both do it in a very elegant flowing way.

Took a dump so big this morning it took 3 flushes. This is the Dark Bowls thread right?

Implementation is super easy, if you're using a VST amp sim, turn off the cabinet that's in it (or see if it lets you load IRs, as most modern VSTs just use IRs for cabinets). If you use a real amp, get a reactive load box, plug your amp into that instead of a speaker and record it into the DAW, then use an IR loader like NadIR to load an IR into it.

I can't believe synth1 is still around, that's great!

Kinda was trying to be controversial! > :(

I know I've said it before but it bears repeating to stress how much Koshiro's work on Revenge of Shinobi pales in comparison to the Shinobi III soundtrack. Open your pedestrian eyes and ears to the truth, theshizz.org.

the amp match thing was fun to play with, but I always ended up using one of the stock amps and then going in and changing components till I got the sound I wanted. Bias is one of those things that gets me sucked into the editing so far that I do that over playing the thing.

You know both pentatonic AND harmonic minor? 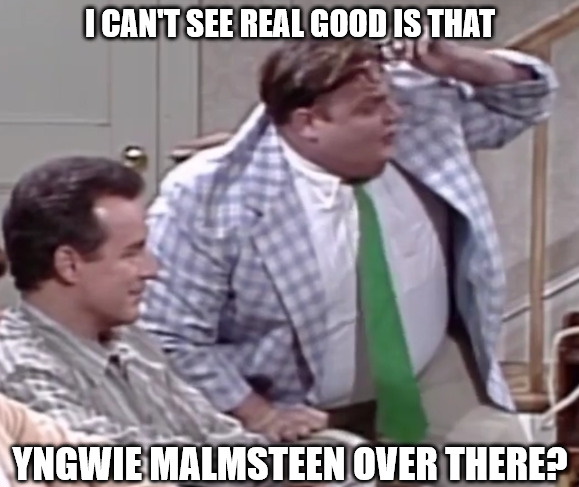 no wonder you suck at guitar, the rules are simple, kiddo:

3. jerk off in public (wash your hands too lol)

My thumb keeps getting sticky so I can't slide around as accurately for these sweeps I'm practicing.

It's important to wash your hands after jerking off so youtube can check out your sweet sweeps.

Just got around to watching Picard. Kinda sucked.

The main advantage being it's smart to separate your personal files and samples from your OS drive so you don't have to re-copy terabytes of data after an OS reinstall. SSDs have finite write limits so the more you write to them the quicker they will become read only (but even writing entire sample sets to them daily isn't enough to significantly reduce their lifespan).  The other benefit is to help organize your stuff, I keep as many things separated as I can for ease of managing all my stuff across different computers, my main PC is structured like this: 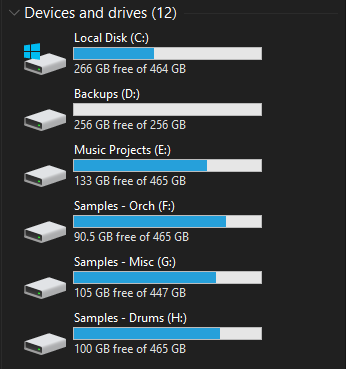 The bulk of my samples and other things are stored away on large HDDs, my PCs only use SSDs and spreading all those writes among multiple drives is gonna help them last longer since I'm always editing samples and creating patches and all kinds of nonsense. The VSTs themselves are installed on the system drive, but their sample sets/content is static on a separate drive, so I only need to install the VST and not all the samples, significantly reducing writes (and saving me time).

Much like any new yorker we new yorkes see running for office, we will not vote for him over a non-new yorker that's on the ballot. To make a big name for yourself in this city you have to be criminally opportunistic and corrupt and to make it to governor takes even more. What Cuomo did at the beginning of the pandemic was necessary and he did a good job, but now seeing his face every single day at noon on local TV as he smirks when talking about people dying as if it's some kind of notch on his belt that he's still leading during a crisis... fuck that guy.

Also fuck the people who are behaving as if it's all over, in some ways they're even worse than the hoaxers.