I want to learn how to play like this:

only one way to find out

wuhhh gameboy chiptunes from pingosimon? My penis grows with excitement.

i have a stupid question: Why don't we just use http://reddit.com/r/theshizz ?

I made an 8-bit version of my favorite Pallbearer song. I dub this "chipdoom."

I've been told it's good music to shit to.

I'll have to test this out sometime.

Let me know how it goes!

you should probably consider changing your name. there was a very influential emo band called plunger featuring tom lommachio in the 90s.

Whoa I guess we missed that. The only other Plunger band I was aware of was some disbanded band we found on Facebook from Pennsylvania or something.  If it becomes a problem we'll just change our name to Plunger (USA). You can be our lawyer.

Oh we have some live videos. Filmed by pingosimon!

sparky and I have a two-piece called Plunger. I play drums, he plays bass, we both sing.

I've been told it's good music to shit to.

sparky and I entered a coding competition and made robot_dance_party.gif in two days. Make a robot dance party in your browser. Do try it! And if you like it, please vote. 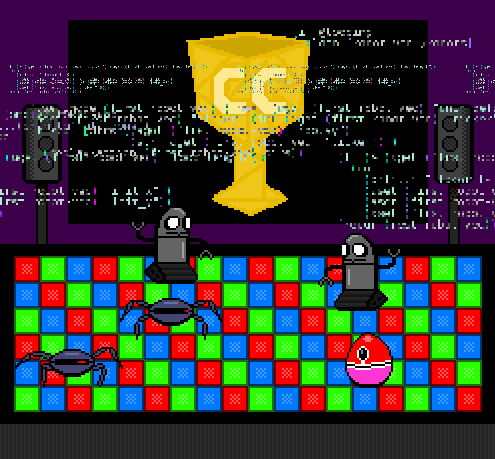 what is a 'POOPY CHEESE BEEF'? Bumping this thread was a good antic!