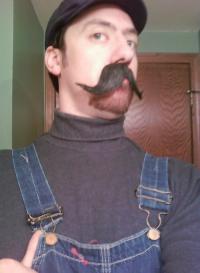 I hope it's Ringo Starr, Betty White, and Dan Akroyd in a supergroup called The Survivors.


Ringi and Betty I get, but who died in Dan Akroyd's--

Sean roomed with Norg, Finbeard and I. Some of you might have seen him if you stopped by our room. Norg kind of brought him to the Shizz Suite and introduced him as Justin for whatever the hell reason.


And now you know.


Yeah, who the hell is Justin supposed to be, again?

I met some guy named Jace at the Shizz Suite who looks like Ben Folds. That was pretty cool. All the beer was already gone, though.

I also realize everyone has their Shizz names, but I don't know them or barely heard them on the weekend. Well, except Sindra, but I always call her that in real life since forever.

Sindra's the reason I first came to MAGFest two years ago. Although she ultimately couldn't come, I still had a good time, and have attended ever since.

Here's what I did with my time that first year, because this is the sort of thing I'm prone to do:


I had a good time this year, but I was just so wiped from work that I didn't do a whole lot except decompress. But I got to meet some of you cool Shizz peeps. Although Destructoid did steal all my beer, so it kind of evened out...

The Friendzone is not where you get stuck just being friends with a girl. It's where you realize someone does not return your romantic feelings and you choose to continue a relationship with that person in the hopes that they will change their mind. You can just be friends. But if you're playing at being friends, and waiting for the right time to make another move at romance or sex, you're Freindzoning yourself. It's rather dishonest I think. You're better off being genuine in your interactions with that person. You never know, maybe you will come to see that person as just a friend, and they will begin to romanticise you because you're so awesome, then Friendzone themselves.

THIS. (Except the bit at the end, hahaha.)

There's such a thing as chemistry, and it can be completely one-sided sometimes.

I also think this is something mostly experienced by guys who don't believe they have other options, or simply don't want other options. Also, these Tend to be guys who have never had to shoot anyone down themselves. I used to be there, once upon a time.

(No specific advice for anyone, just commenting how it's weird that I don't have cause to worry about this anymore.)

I really can't put it better than the quoted above. But I do sympathize with those who feel like this happens to them a lot.

Ah, I do have a piece of advice: that whole "stability" vs. "chaos" thing sure sounds to me like someone who isn't ready to settle down, and you may be (or she just thinks you are). Some people just fon't want anything serious, and will avoid the people who seem like they might fall in love too easily -- at least before s/he has time to make that evaluation for themselves. It's REALLY hard to disappoint someone who is totally smitten with you when you don't feel the same way.

The first time I met my wife, we had a fun, flirty, boozy night. Then she made a point of ignoring me the next day, expecting that I'd just follow her around. I just shrugged my shoulders and let her be. She then came back to me all "Why are you ignoring me? That's not how this is supposed to work!" XD

Uber Shizz n00b here! So I do a fast reply (like this one), and it seems like the board doesn't recognize my carriage returns. Like so. But if I go back and edit, they're still there. Saving seems to display them properly the scone time. If this works this time, I will be very embarrassed. (There should be five lines, now.)

I heard that too, but I don't know how many episodes he had in the can before that happened. They were all ready for that October 19th premiere, so my guess is "a bunch". I can totally se te show killing or otherwise writing off Pierce with a one-liner and NEVER MENTIONING HIM AGAIN. Hahaha. I wish that this show were so meta that this whole thing with Harmon and Chevy Chase was a huge "gotcha", and Pierce gets some amazing sendoff episode. Alas, I fear it's all too very real... I must have watched the multiple timelines episode 20 times. Now I always stock my bathrooms with olives when I throw a party. XD

This is Sean. You may have met me this year at MAGFest. I hang out with Sindra through the Powet.TV crew.

I met a few people through the room and at the Shizz Suite over the weekend, but all I have are real names! I don't know anyone by their handles, and was legitimately confused when they were used instead. (So much so that I mistakenly turned away someone looking for George.)

Anyone wanna make a new guy feel welcome by letting me know who you are and if we've met? :8

I should have some fun video going up soon. Didn't do any collabs with Sindra this year, but you can checkout our 2012 stuff. In fact, she got recognized by a rando this year for when she crashed Brentalfloss's panel dressed as Richter Belmont. (I was her camera guy, editor, and moral support.)