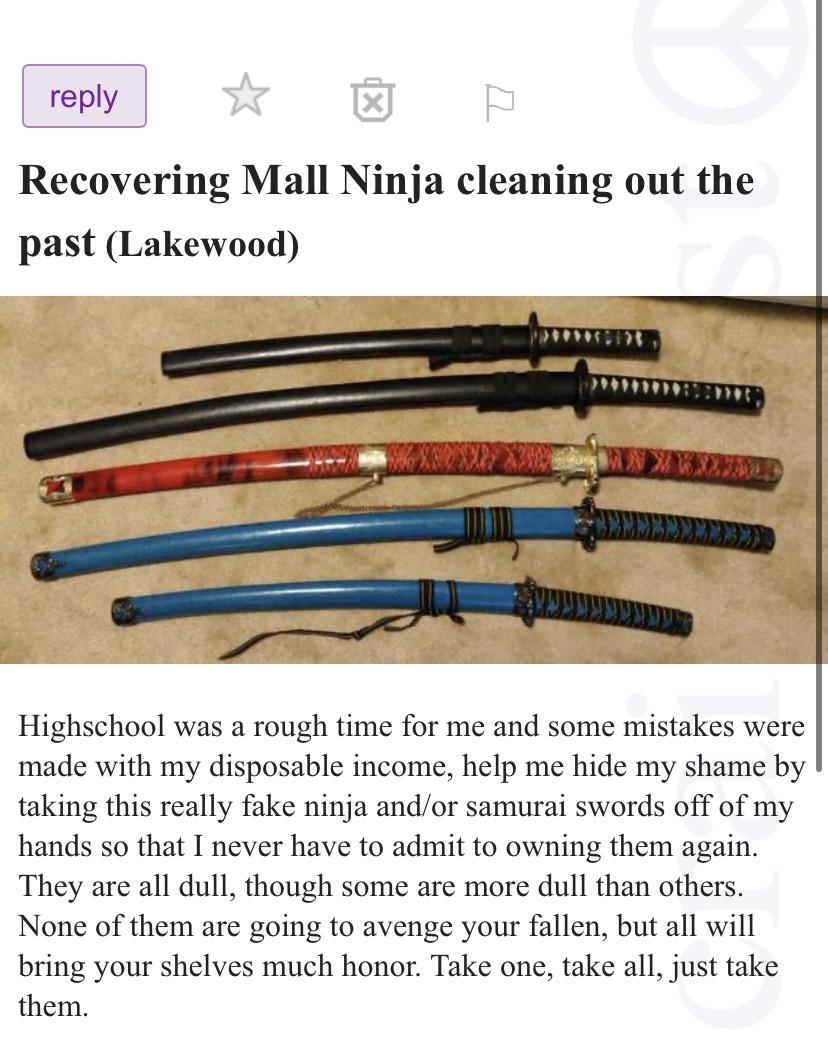 Do you want lessons Erich? I'm trained in katanas, albeit, I've never used a real one. But principally, I know how to fight with them, or anything that's shaped similarly.

In Topic: The home recording thread

Right now I use the Sennheiser HD6XX (from Massdrop), They're PRETTY solid overall, in terms of balance, albeit, a bit lacking in bass just a bit. But I also run all of my mixes through multiple systems, and getting the bass right is almost always a priority for me anyways, so I know how much to compensate for that, intuitively.

What I ACTUALLY want to pick up are the Audeze LCD-X. They're probably the end game for me. I know other pros (and at least 1 in our own VGM community, who's done some SERIOUSLY big works) who use the AKG K712. I'm not sure what my final headphones setup will look like (if you can spare having multiple headphones to check on, it's a good idea as well), but I'm prioritizing getting the LCD-X first (the hard part is finding a way to test them to make sure I actually like them for mixing/etc.).

For what it's worth, I don't think that pointing out their platform is a bad response to differentiate them from George Bush. Most of the stuff in there would not have been in George Bush's platform. I just wanted to explain where I was coming from with that comment because I am very skeptical that what they actually do when in office will resemble what they say they are going to do in that PDF.

Obama's campaign promises definitely differentiated him from George Bush. But when it really came down to it, he filled his administration with bankers and even many Bush staffers, and continued/expanded many horrible things that Bush started. Like, I don't see Biden closing down the ICE concentration camps considering that he helped create them.

Shit like this is definitely why I've more or less given up on following or using social media anymore. My Facebook isn't actually that bad (it's not like I have relatives who have problematic beliefs or anything like that), but when the political stage of the US is just as you say, there's really nothing interesting to talk about anymore. It's just insanity and outrage, and not enough plans to fix our dumb systems/incumbencies. I think I'm more or less putting it all on full ignore for I guess until a bit AFTER the election results (because of course there will be a shitstorm at that time too), while still doing the best I can to be an informed voter.

Yeah I've been pretty frustrated with the discussion on social media surrounding this election. I say this a lot, but liberals who want to elect Biden should probably spend more time phone banking to reach out to those moderate conservatives and less time arguing on Twitter with black socialists who don't even live in swing states. And leftists who are arguing about whether or not voting is "harm reduction" should probably spend less time arguing online and more time actually doing harm reduction.

I'm not saying you shouldn't vote, but that the "harm" is coming no matter what and that is something we need to prepare for. A vast majority of the difficulties that many communities face are not going to change with Biden in office. If you want to actually "reduce harm", then start getting involved in some kind of mutual aid work. Contribute to bail funds if you have money. Find ways to address the problems that affect your communities, and especially see if there are any ways to materially support local black or indigenous led groups that are already organizing.

Maybe you personally don't feel safe taking to the streets to protest police brutality or whatever. But chances are you'll do a lot more "harm reduction" if you focus on stuff like learning some basic medic/first aid skills, showing up to do Jail Support work, or distributing food to people who need it. Because the front line against the problems we face isn't in the ballot box. It's in the streets, in your community, and in your workplace. And there are countless different ways for anybody to contribute that are a lot more effective than voting once every four years (especially if you don't live in a swing state lol). Personally, a thing I've been focusing on lately has been helping to prepare some local activist groups with digital security related things to keep themselves safe when they participate in any form of direct action.

A friend of mine from my local Food Not Bombs chapter wrote this really good article that was published by Crimethinc (pretty long tbh, but it's worth at least reading the first few sections). It details a mutual aid network in Poland called Visible Hand, organized at the beginning of the pandemic. It's absolutely incredible to me what those people accomplished. This literally started with some guy adding a bunch of his friends to a Facebook group to help each other out, and within a few days it grew exponentially into a nationwide, grassroots mutual aid network consisting of 90,000+ people. Networks like these have been appearing in many cities. Chances are there is one not far from where you live, and if there isn't you could probably start one yourself following their example.

I saw this video earlier and I think it has some pretty interesting perspectives in it. I don't necessarily agree with everything he says, but I think the part at the end embodies a lot of what I'm talking about.

(quoting to get it to this page) Thanks for this. Gonna start looking into all your recommendations.