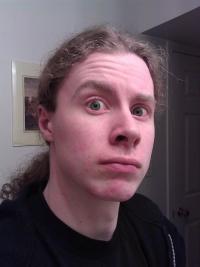 I'm the Demonstray, but you can call me Cory, regardless of who you are!

I like symphonies and classical music, 80's and 90's synth music, a ton of metal and most of all, the majority of progressive music. I listen mostly to Edge of Sanity, King Diamond, Symphony X and the like.

I'm a progressive death metal artist called Cryosis. I generally theme my music around insanity and the human mind, space and time, reality and fantasy. All of my music tends to follow a pretty twisted concept, and I tend to tie all of my songs together into a giant cosmic fantasy. A lot of the music I write sounds "cold" according to most, which is why I chose to keep the name Cryosis even after I decided it sounded good.

I am a huge fan of the Mega Man Legends games, the Mortal Kombat series, Sonic The Hedgehog (and Adventure) series and most psychological thrillers/survival horrors including Call of Cthulhu: Dark Corners of the Earth, Eternal Darkness: Sanity's Requiem, Penumbra series, Silent Hill series and The Suffering games.

Here's some stuff I find funny and apparently no one else!

"I was too busy fuckin' bitches to lose my virginity. Ain't got time for dat shit; too many bitches."

in the end, you all need me because when everyone is too boob'd to drive, i'll be there to take the wheel. or when a pair of pendulous palookas has hypnotized your brain into jello. i'll be there with the clear head to save you from the harpy at the helm of those traitorous tishmongos.

The humpty hep is your ham to do the scrimp

Well fuck you, man, there's a million black holes out there and you don't know shit.

this entire situation makes no fucking sense to me, and i am the crowned prince of not making sense.